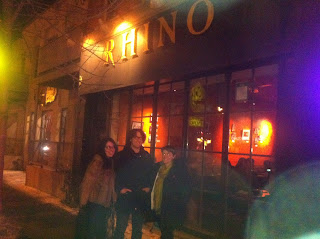 We were walking along Queen Street one day when I turned to Jessica and said "I really like the name 'The Rhino'.  It evokes the kind of imagery I want when I think of a pub.  The leathery feel of rhinoceros skin, the dark grey colour palate, its wise and ferocious demeanor, I don't know why but for a pubs name, it totally does it for me."

This is normally the moment when Jessica rolls her eyes and mutters something about marrying a man who rarely has anything interesting to say.  She's a bit like Ursula from One Hundred Years of Solitude.  But this time, to my amazement, she agrees!

"I know!  It's a great name.  But most of all its the kind of name you can say to your friends and feel cool.  Like 'Hey Todd, I'll meet you at The Rhino!'.  It's way better than saying I'll meet you at the Fluttering Dandelion.  Know what I mean?"

She doesn't reply.  Shes loves me but she hates my jokes.  But she secretly LOVES my jokes too. 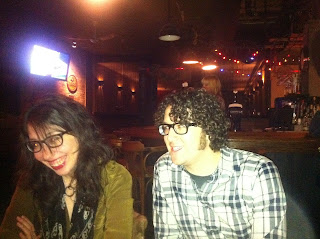 We had visited The Rhino earlier that week.  Neither of us had ever been, it was a snowy day, and pub food seemed like the perfect match to our mood.  We invited our friends Aaron Doyle, art director from Young and Rubicam, and his new fiance and graphic designer extraordinaire Cassie Radstaak.  I first met Aaron years ago when he was an AD at Doug Agency (now doug & serge).  We were both starting out so we worked on a few projects together that turned into amazing experiences, successful campaigns, and awesome portfolio pieces to boot!  Along with his writing partner Matt Beasant, we often frequent what is perhaps the best pub in Toronto: The House on Parliament.  So going out for pub food that evening seemed perfectly in keeping with our ways.

When we arrived attendance was pretty sparse.  The pub boasts lots of tables but there were maybe 10 people seated.  No biggie really.  It was a Tuesday night and really, who goes to a pub on a Tuesday night?

The server came over quickly, took our drink orders and gave us menus.  To my surprise, The Rhino is both a pub and a traditional French restaurant.  On the menu were french staples like Coq au Vin and Steak Frites.  I wasn't particularly in the mood for French cooking but I had my fingers crossed that one of my dinner guests would sample a dish.  Jessica was in a typical pub food mood and ordered the burger.  Aaron felt the same but he ordered the cheeseburger.  I ordered the special of the night which was a steak and bean burrito and salad.  Cassie, being the wonderful person that she is, saved the day and ordered the Streak Frites.  But to start we ordered a sampler appetizer dish for 4 people which included some chicken and shrimp skewers, deep fried calimari,  and bruchetta.

So lets start with the appetizer.  If you've ever been to a wedding you already know exactly what the skewers tasted like.  Perfectly fine!  Absolutely nothing wrong with 'em.  Nothing particularly great about them either, but definitely nothing amiss.  Same could really be said about the deep fried calamari and the bruschetta.  It was perfectly okay!

The burgers and fries arrived first and they looked great!  Both Aaron and Jessica took a bite at the same time and, when I asked how they tasted they replied..."good".  Good.  That's never a good sign.  Especially since a burger tastes its best upon first bite.  By the end of the meal both Aaron and Jess agreed that the beef was good but the bun was pretty cheap and the fries were just ok.  When I asked how they might rate their meal out of five they both replied "two and a half".  Fair nuf!

My burrito was also, umm, good.  I suppose.  It was small.  When Aaron saw it he joked that it looked like a slightly pudgy spring roll.  The first bite was pretty bland however the taste improved as I ate, but not by much.  It came with a salad but really, I can barely remember it.  It was your typical pub salad; an afterthought.

The real surprise of the night came with Cassie's streak frites.  She ordered it done medium and it arrived perfectly pink.  The seasonings and the accompanying peppercorn sauce were great and not overdone so you could still taste the beef itself.  It boasted some handsome grill marks and  paired well with the fries and vegetables.  For a pub steak, it was pretty impressive.  Needless to say she finished the whole thing and we were all a little jealous.  When I asked her to rate her steak out of five, she gave it a four.

So I suppose the lesson here is....when you attend a pub that fancies itself to be a traditional French restaurant, regardless of how pubby the atmosphere may be, order the traditional French dishes.  However be wary about translating that advice to other real life situations.  Like when your dentist fancies himself to be a modern dancer.  Martha Graham style.  Yeah.  If he offers you tickets to his one-night-only performance at the community center, more often than not you should decline.  Unless he gives you the gas before the performance, then it might be fun.  Might be.

1. Avoid at all costs
2. I would not return
3. I would return
4. I would return and bring friends and/or my picky mother and/or my foodie Aunt Jenny
5. I will most likely lie awake at night fantasizing about that food much to the chagrin of my fiance.

Daniel Ehrenworth
Hi Guys! In addition to being a completely unqualified restaurant reviewer, I am also a photographer. Check out some of my commercial work at www.dephoto.org and my artwork at www.danielehrenworth.com